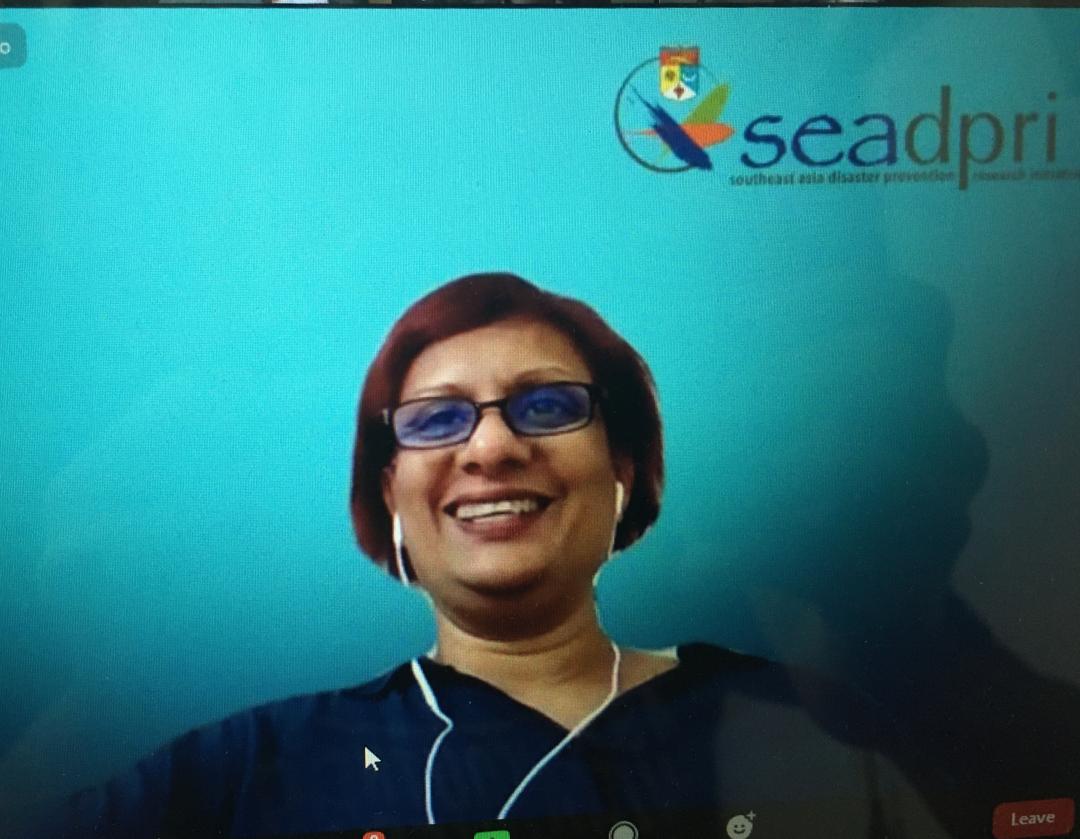 “Despite our increasing capacity to adapt as technology advances, the risk of extreme outcomes is generally expected to increase more than we can adapt, and for some outcomes such as heat-related death, worsening poverty and crop failure, there is no adaptation to a 4 degree world.”

Prof. Joy started the  session by explaining the terminology used in climate change discussion and the importance of clearly defining it. For instance, she stressed that there are both natural and anthropogenic (originating from human activity) contributions to climate change, and that getting this right is crucial for negotiations, as there is an element of compensation involved. Only when climate change is also attributed to human activity, rather than natural variability alone, will this element of attribution  come into place. Terminology is also important because of the multidisciplinary nature of the IPCC; a standardized vocabulary ensures that everyone has the same understanding and can communicate accurately.

Going deeper into the issue, Prof. Joy explored the concepts of climate extremes and attribution of extreme events. While there is evidence that the extremes of some climate variables such as temperature have shifted as a result of human activity, the attribution of single extreme weather events to anthropogenic climate change remains challenging. This is an important gap to address since attribution is key in obtaining compensation for damages resulting from extreme events.

She then shared observations of past extreme events and the future projections of climate extremes in Asia and specifically Southeast Asia. One of the highlights from what Prof. Joy shared was that our potential for adaptation could in some cases decrease as global warming and climate change worsens. Despite our increasing capacity to adapt as technology advances, the risk of extreme outcomes is generally expected to increase more than we can adapt, and for some outcomes such as heat-related death, worsening poverty and crop failure, there is no adaptation to a 4 degree world. This brings about a sense of urgency for mitigation and adaptation, as the longer we delay, the lesser is our ability to adapt.

Mitigation and Adaptation in the Local Context

Furthermore Prof. Joy highlighted that the majority of disasters that affect Southeast Asia are climate-driven, such as floods, landslides, storms and drought. According to the Cambridge Centre for Risk Studies, climate-related threats account for 30% of total projected gross domestic product (GDP) damage across cities in the region, where total GDP-at-risk can be as high as 5%. She also shared examples of climate-driven disasters in Malaysia and local initiatives in Disaster Risk Reduction (DRR) such as her experiences from her collaboration with Kuala Lumpur City Hall (DBKL) and the Newton-Ungku Omar Fund (NUOF) on Kuala Lumpur’s susceptibility to landslides and her project with the Selangor State Government promoting social entrepreneurship in DRR.

Throughout the session, Prof. Joy shared a number of challenges for mitigation and adaptation efforts in Malaysia, such as the lack of peer-reviewed literature. Most of the  scientific work that originates from governmental bodies has not undergone a peer review process, which raises doubts on its reliability. For example, how would observers know that rainfall projections are reliable? How can one base policy decisions on them with confidence without any form of independent verification? In contrast, Indonesia in its Third National Communication on Climate Change, used climate models based on information drawn primarily from peer-reviewed scientific literature and conducted participatory action-oriented pilot studies which took into account local-level climate change impact analyses and inputs from a wide range of stakeholders.

Another challenge is the lack of transparency and willingness to make data accessible to the public. For example, in the KL  landslide susceptibility project, DBKL is not prepared to make the findings accessible to the public, apparently due to concerns that the community would not be able to handle the information effectively and that real estate prices could be adversely affected. Prof. Joy believes that open access would be beneficial for the public as the data could enable the community to be better prepared.

Disaster risk reduction is going to be increasingly challenging with climate change, hence mitigation and adaptation efforts need to be context-specific, as each region has unique vulnerabilities and exposure to hazards. However, such efforts need to also be coherent with other aspects, as they are multidisciplinary and inevitably interlinked. Additionally, transparency and international collaboration are crucial for climate action. Everyone needs to collaborate to bring about cross-sectoral changes on an unprecedented scale, involving innovational, technological, and behavioural changes.

Towards the end of the session, the question and answer session brought in interactive discussions between Prof. Joy and MYD members. Prof. Joy challenged youth groups like MYD to be actively involved in this effort by building synergies and partnerships, communicating the sciences to a wider audience, and engaging with various stakeholders on climate action. Prof. Joy ended the session by reminding the members to be enablers; that is, to be proactive in  bringing about positive change and action.

The Malaysian Youth Delegation and Prof. Joy during the 2nd Study Session over Zoom.

Share your email with us to keep up to date on articles, events, and opportunities from MYD!