#MYD2018 Training Series: The Role of CSO in Climate Negotiations

As part of the MYD Training Series, Mr. Nithi Nesadurai, President of Environmental Protection Society Malaysia (EPSM) and Regional Coordinator of Climate Action Network Southeast Asia (CANSEA), will deliver a talk on how Civil Society Organization (CSO) play a crucial role in at the UNFCCC level and how observers contribute in the overall power play of the international climate negotiation process.

This event is open to everyone, so do come!

#MYD Training Series – Training on UNFCCC negotiations and media work with various climate experts, government bodies and civil society leaders. Each sessions will run for approximately 2 hours and will be available on Facebook for future reference.

COP23 is the 23rd Conference of the Parties to the United Nations Framework Convention on Climate Change (UNFCCC). It is the main annual meeting of all nations under the UNFCCC to build and strengthen intergovernmental climate policy.

The Conference will comprise sessions of:

A Little about COP23 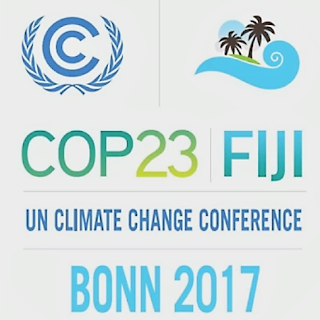 COP23 will be focusing on:

The special thing about COP23 is that the conference is led by the Presidency of Fiji (Fiji is the host) but hosted off-site in Bonn (where the UNFCCC Secretariat is). So, the host team works closely with the secretariat of UNFCCC, both governments, the State of North Rhine-Westphalia and the city of Bonn in organizing this conference.

COP23 is fused with the Fijian Bula spirit, which means hello or welcome, with a deeper sense of wishing others a blessing of affection and good health. The conference plans on showcasing Fijian and Pacific culture, art and life. The design of the logo was meant to act as a reminder that rising sea levels are affecting not only small island developing states but also coastal cities in many other countries.

The Bula Zone spans from the World Conference Center Bonn to the UN Campus as well as a temporary extension. Plenary halls, meeting rooms, delegation offices, a media and press center as well as catering and other facilities are prepared for a variety of activities.

Setup of the Conference Here’s a virtual tour of the conference venue:

The presentation of the logistical preparation can be find HERE as well.

Sustainable Aspect of the Conference

The conference aims to be climate neutral through a series of action plans, hoping to offset the unavoidable emissions (like flights). Actions include virtual participation, paper reduction, European Eco-Management, and Audit Scheme (EMAS) verification, vegetarian catering and etc.

CLIMATE CHANGE NEVER SLEEP, SO DO WE

YES, climate change is happening when you are reading this post. AND WE NEED YOU

Malaysian Youth Delegation (MYD) is recruiting for our 2017 intake to the COP23, this year at Bonn, Germany – the Headquarters of United Nations Framework Convention on Climate Change (UNFCCC).

For those who missed the best part, here’s a basic explanation of what we do and why YOU are important to be part of this movement, in 5 minutes or less.

Click here and here to see what other past MYD members/partners said about their experiences with us.

You can also find a collection of articles from MYD2016 and MYD2015 here to have a sneak peek on what we do in the past. Alternatively, if you are sooo keen and sooo into reading more about us, you may search “MYD” on our website to find out the comprehensive list of MYD articles!

The Malaysian Youth Delegation (MYD) is the voice of the Malaysian youth climate movement at Conference of Parties (COP), more formally “the United Nations Climate Change Conference. Made up of dedicated and inspiring youth leaders from across the country, the delegation represents the demands of a generation working to create a just, safe, and livable future for all.

MYD objectives are to:

COPs are yearly conferences held in the framework of the United Nations Framework Convention on Climate Change (UNFCCC). They serve as the supreme decision-making body of the Convention to assess progress in dealing with climate change

UNFCCC Headquarters at Bonn, Germany. Image by Adopt a Negotiator

Soooo, what does MYD really do?

The Paris Agreement was adopted on 12th December 2015 and entered into force on 4 November 2016. The whole process took less than one year. This shows that the world as a whole agreed on a path forward, a path to keep warming well below 2 degrees Celsius, and for the first time to pursue efforts to limit temperature increases to 1.5 degrees C.

Thus, YOUth involvement is vital to reshape this process in a way that meets the needs of our communities, and our planet when our future is being negotiated!

The delegation will be facing many challenges within and outside of the UN framework. We’re looking for excited, talented, inspiring young people to join us this year. Our focus will be in growing real change, both at COP and beyond.

The structure of the programme and delegation will be in three primary tracks: Advocacy, Media and Mobilisation. Here are a few examples of what you might do as a delegate within each of these tracks:

Other potential responsibilities on our team include fundraising, logistical support, identifying and facilitating coordination opportunities with other youth-focused groups, leading on artistic elements of action, and more! There is a TON of flexibility in how you use this space. We are open to new and creative ideas on how our delegation can most effectively push for the world we need.

(Spoiler ahead. If you want to know more, please continue to read. Don’t say we didn’t warn you)

What MYD will do ?

Throughout the year, we will be organising training series which the topics will be on UNFCCC and related to Malaysia climate policy and also engagement activities

The tentative agenda are as below.

*all agenda listed above are subjected to change

A tired day at the negotiation

Light moment with Malaysian Negotiator and CSO during COP

Application is opening real SOON and we need you!

We always believe YOU-th are the solution. We are opening our application for Malaysian Youth Delegation (MYD) to this year’s COP23, @ Bonn, Germany! STAY TUNED

All applicants will be called for an online screening interview. Then, we will be hosting an in-person retreat for all applicants, which will be held on the weekend of 8th & 9th April (tentative). Location is yet to be determined. The  applicants only will be selected and notified one week after the retreat.

Throughout the entire COP23 journey, the delegation will have the opportunity to work with government officials, civil society representatives, and youth from around the world, all while organizing direct actions, coordinating media outreach, and lobbying government delegates.

We look forward to seeing your application!

NGOs who took part in Global Divestment Day. Image was taken from: http://newsroom.unfccc.int/unfccc-newsroom/13-14-february-is-global-divestment-day/

One of the biggest hurdles in combatting climate change is to reduce our dependency on fossil fuels and other pollutants. However, there are individuals who still stand to profit from the industry. The only way to fix that is when the industry is no longer profitable or the business is no longer operational. A way to lead to that is by way divestment.

Divestment is the opposite of investment. It is where you take out your money, in the form of stocks or bonds from a company so that you cease control or stop getting profit from it. Corporations are beholden to the wish of their shareholders. Thus, if there no longer any interest to pursue the business, operations can calm to a halt or at least, have less capital to operate.

Where has divestment been used effectively?

The apartheid regime was a dark part of South Africa’s history. It was a system where black and white citizens could not mix with only the white population receiving quality infrastructure and amnesties. Its impact on income inequality and racism can be felt even today.

At its peak, a majority of the world’s nations has imposed sanctions and divested from the country. Companies were supposed to invest in the country pulled out, amid pressures from nation states. The divestment was done in support of the growing anti-apartheid movement, led by notable leaders like Nelson Mandela and Desmond Tutu. It was the non-violent alternative to Mandela’s violent tactics that landed him in jail prior.

Recently, Desmond Tutu visited the University of California, Los Angeles to thank the university for pulling out investments from the country, which led other organisations to do the same. The regime then caved in from the economic incentive.

In opposition to the Zionist regime and the apartheid-like treatment done by the Israeli government on the people of Palestine, sympathisers ran the Boycott, Divestment and Sanction (BDS) movement. The movement was a non-violent alternative to boycotting products from the state of Israel to deprive them of revenue. Even if the impact is questionable, at least they know their money wouldn’t land in the hands of the Israeli military.

While economically, Israel still stands strong, the movement has gained traction in the European Union. This has led them to ban items from Israeli-occupied lands that were exported as Israeli goods. Due to this, multiple companies have decided not to invest or at least pulled out their money from companies based in the occupied territories.

How does this apply to the fossil fuel industry?

Desmond Tutu has called for the same tactics used in South Africa to be used in the fossil fuel industry. He urged companies to pull out the biggest industry players, making them unable to expand operations and stuck with their current situation. It is only when they decide to move on to other sources of energy than the world’s richest should be able to invest in them, without guilt.

Loss and Damage associated with climate change impacts was first discussed and initiated at the COP16 held in Cancun in 2010, as part of the Cancun Adaptation Framework. This issue which specifically focus on the context of developing countries are more vulnerable to adverse effects of climate change, including extreme events and slow onset events were then formally addressed by the establishment of Warsaw International Mechanism for Loss and Damage associated with climate change impacts at the COP19. The initial objective of the mechanism is to promote the implementation of approaches to address loss and damage in a comprehensive, integrated and coherent manner. (Decision 2/CP 19)

Loss and damage of vulnerable cities due to climate change. Image was taken from: Millennium Post http://www.millenniumpost.in/NewsContent.aspx?NID=199956

The main functions of the mechanism include enhancing knowledge and understanding of comprehensive risk management, strengthening dialogue and coordination among relevant stakeholders, enhancing actions and support through the means of finance, technology and capacity-building to address loss and damage associated with the impacts of climate change.

The administration of the mechanism has been placed under the Executive Committee of the Warsaw International Mechanism for Loss and Damage. A total of 20 members, 10 each respectively from Annex I Parties and non-Annex I Parties forms the committee, governed by an agreement made at the COP20.

The Executive Committee wasted no time working on the initial two-year work plan that encompasses the following action area:

At the COP21, Loss and Damage is defined as a stand-alone issue rather than being a subcategory under Adaptation, largely due to the reality that there are significant impacts from climate change that could not possibly be adapted.  It is also clearly stated in Paris Agreement that Warsaw International Mechanism of Loss and Damage associated with climate change impacts has been decided to be extended from being expired in 2016. The decision has been widely recognised as a necessary move which explicitly differentiate adaptation to climate change and contending with the associated losses and damages.

Following the decision coined at the COP21, the latest list of nominated committee members was updated on 24 May 2016. The Executive Committee has thus put on high hope continue its effort in averting, minimising and addressing loss and damage issues associated with climate change adaptations.